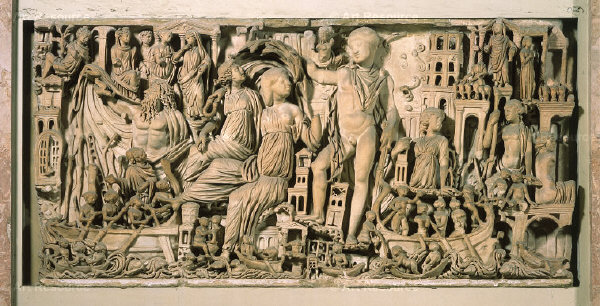 FROM ROME TO RICHBOROUGH

THE REASON FOR UNDERTAKING A JOURNEY THAT HAS ALREADY ABSORBED more than seven years still holds true –  to explore the places that St Augustine visited on his missionary journey to England, and look for insights into his character, leadership and the issues that shaped both his journey and the nine months that it took, occurred in Merovingian France at a crucial period of political transition.

It would have made sense to undertake the experience as a continuous journey, but time, life and my own ministry have not made it possible to explore this fascinating and inspiring story in this way. However I was able to begin with  ‘St Augustine’s Rome’, and visit the places that the pope’s missionary – and England’s first Archbishop – would have known in AD 596, which was the year the mission to Canterbury was launched. Augustine’s journey was not completed until the Spring of 597, and his mission to Kent was still in its infancy when Augustine died in 604.

What clues might be found here in Rome that cast some light on the man and his mission? Or how he saw and conducted the mission once he arrived in Kent? And what implications, if any, might this have for our understanding of his missionary methods? Was the ‘Roman’ approach significantly different from the descriptions of Aidan’s mission to Northumbria some thirty years later, as we read in Bede’s Ecclesiastical History?

On a personal note, I write as a priest in the Church of England, serve as Director of Licensed Ministries in the Diocese of Canterbury, and since 2009 have been an Honorary Canon of Canterbury Cathedral. St Augustine’s mission has been of both personal and professional interest for more than a decade, and the insights the journey has brought so far may be useful to the future direction of ministry in this diocese and in other places.

On January 10th 2013, the Cathedral College of Canons  meets to formally elect the 105th Archbishop of Canterbury.  This seems a good time to reflect again on St Augustine’s role as Bishop Justin Welby prepares to follow in Augustine’s footsteps and sit in his seat in Canterbury Cathedral.

My search for a coherent story of Augustine and his mission began with a personal pilgrimage to Rome, May 31-June 7, 2004, and is still work in progress in 2013. I offer this in the hope that it may also be useful to you.

Peace be with you!