Augustine and his companions most probably arrived at Canterbury on foot after arriving at Fordwich, walking on a Saxon footpath from Fordwich to St Martin’s Hill. This remains a popular walk, and we chose one of the hottest Easter weekends on record to explore it. Gill and I  walked from Lady Wootton’s Green via North Holmes Road up to St Martin’s Church. 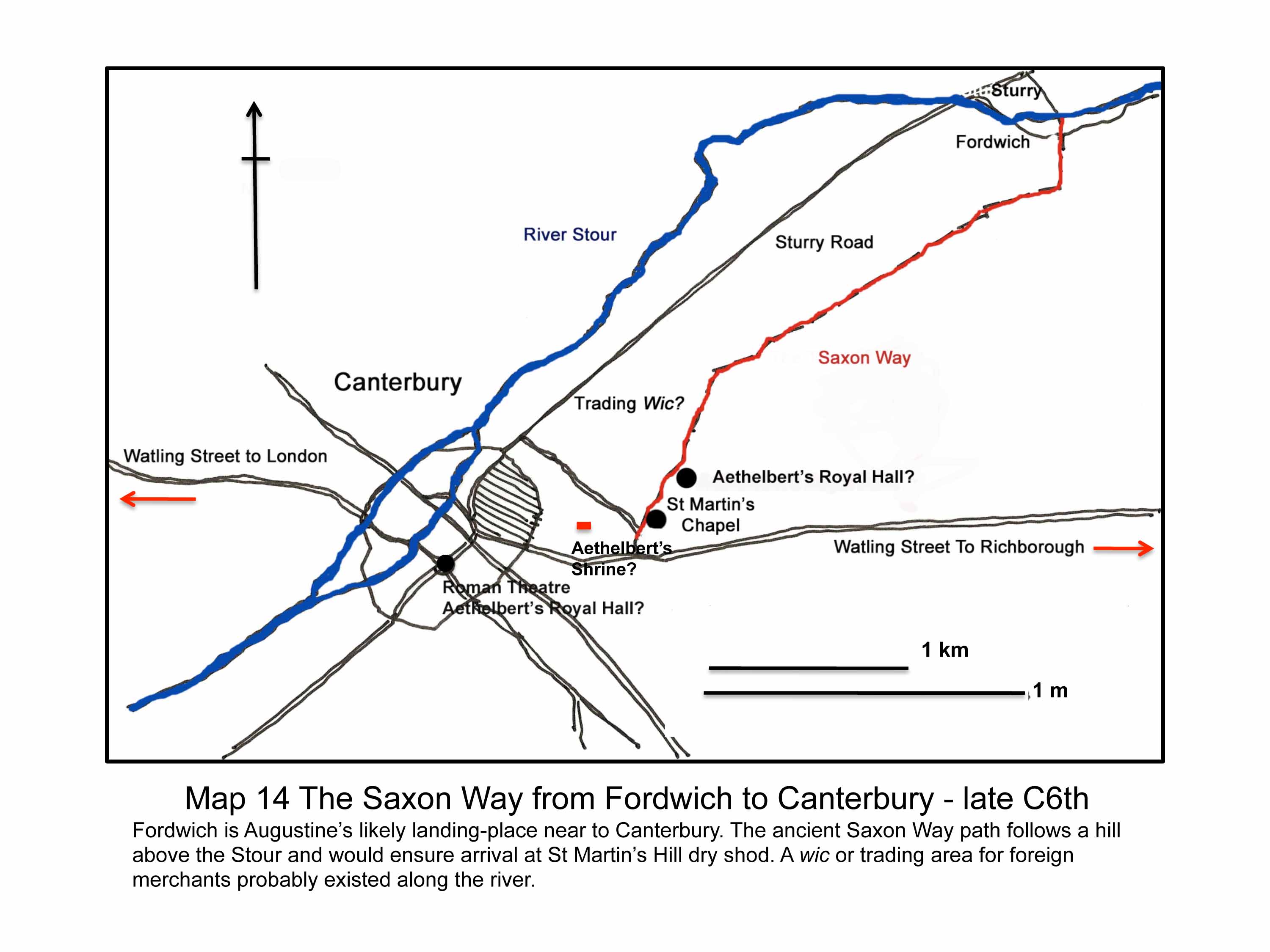 Following the map we had downloaded that morning,

we walked from St Martin’s on a gentle uphill slope towards the medieval Conduit Head that provided fresh water to St Augustine’s Abbey, on through a new housing development (the path is fairly straightforward to follow), across a road, and into a line of trees.

An old power station is visible on the left, and an open field of grass on the right (to the north and south respectively).

The first part of the walk towards Fordwich passes through canopied trees, including oaks, bluebells, scented blossoms, soft grass; a magical springtime experience.

We came out on to another path in the woods, keeping left and passing – on the right – an open area that looked attractive for picnics, and continued between housing below us to the left, and the ridge of a long, flat hill about ten meters high or so, to our right (south).  Most of the walk was under a canopy of trees of various kinds. The path leads to a fishing pool on the left. Millions of tadpoles crowded the water’s edge with all the appearance of an oil slick lining this small, tree-lined lake.

Occasionally views opened up to the left (north) over the Stour Valley itself, and once clear of the houses, we walked down into the Sturry Stour Park, which has gravel paths leading to children’s playground equipment.

We returned to the main path, where the walk slopes down to the left.  At this point an alternative route, through a secluded golf course, continues straight east (signposted with a yellow arrow).

From here, the path drops continuously downwards to the level of the valley floor, exiting over a small wooden bridge, and continuing towards Fordwich road bridge. A Mercedes dealership is visible on the left/north along the Sturry Road, and a scattering of fine houses with extensive gardens stretch almost to the river. The route for us ended at the George & Dragon, (but not open till eleven – we had left Canterbury on foot at 9am, and arrived at the George at 10.05).

After resting our legs for a while near the bridge overlooking the Stour River as it flows lazily towards the coast, we walked around to St Mary’s church (now a conservation trust building, open and attractive) and around to the ancient Town Hall.

The return route followed the ancient Saxon way to Canterbury, but the path turns away from the flood-line, turning uphill (south) past the turning at the George & Dragon and  on past some fine houses and farm buildings, with a harvested and very dry field to the right (west) as we walked up the slope.

In spring walking through a ploughed field, the path is easy to follow, and we crossed over to woods on the far western edge, into some rough ground and a narrow path that led through trees on to the golf course. A few players were on the green, but ignored us as we crossed over, following the posts and yellow-painted tops to more trees to the western edge. This may be the ‘dry-shod’ route, but the ground was still damp in places, despite several weeks of no rain and plenty of sunshine.

This is the most likely route that Augustine and his companions would have taken to reach the royal compound near to St Martin’s, probably in Spring and before Easter 597. (Ironically, and inadvertently, the 104th Archbishop of Canterbury, Rowan Williams, also led a party of pilgrims one Easter Monday from Fordwich to Canterbury Cathedral.  The party had meant to take the lower road, but found themselves on the upper path instead.)

After we rejoined our initial path, we took a detour uphill to see the hilltop. The view improves considerably, and a wide unpaved road runs along the fence and farmland on the ridge, where some of the gorse that grows here had been burned back.

We eventually dropped down again (to the north), following a farm track. Care needs to be taken towards the end, to have both hands free and take small steps as the ground is both stony and slippery.

We retraced our initial route, passing the pond again, this time with another  couple and a brown-coated dog that leapt into the water. We took a wrong turning to the right at a crucial fork in the path, and the character of the trees and the glades changed – darkened – significantly. After a few encouraging comments from Gill about my navigation skills, we returned to the right path and continued without much further incident back to the Conduit House.

The text at the site was in English and also in Braille, which Gill was able to read slowly and carefully, like a five year-old with her first English textbook.

It is also here that we managed our first clear view of Canterbury from the path that runs along St Martin’s Hill.  Fourteen hundred years ago, when this entire area would have been woodland, a view of the walls and the derelict former Roman city would have been just visible from this part of the ancient Saxon Way.

It is a unique and very special piece of our history.

We continued past St Martin’s Church, and returned to the car via the ancient Watling Street from Richborough fort to Canterbury, bought a welcome ice cream, and arrived back at DH at 11.35. The round-trip took two and a half hours.

Rob retired in 2014 from his post of Director of Licensed Ministries in Canterbury Diocese. His current interests are: leading programmes in missional leadership, writing, research, painting and travel. He is a founder member of a 'new monastic' community, the Companions of Augustine of Canterbury, drawing on the inspiration of Augustine's mission to England in 597. View all posts by robmack