THE JOURNEY NORTH – AUGUSTINE IN PARIS

Paris occupies a natural limestone basin hollowed out by the Seine that winds northwest some 93 miles (150km) to the Normandy coast. Germanic invasions by the Franks and Alemanni in the late third century destroyed many of the Left Bank buildings in the Gallo-Roman city. Paris was forced to contract into the defensive stronghold of Île de la Cité using the Seine as a protective barrier. Walls were built along the island perimeter from large stones taken from ruins on the Left Bank.

The edges of the city, both north and south of the Seine, had been left to decay over succeeding centuries following the Roman withdrawal and slowly sank into the surrounding countryside. In tune with the spiritual climate of Paris at the time, werewolves as well as dogs were believed to inhabit everyday life. On Île de la Cité, the historic heart of ancient Paris, a pagan altar once lay buried beneath the public square that stands before the Cathedral of Our Lady of Paris. An earlier Gallo-Roman temple stood beneath the cathedral itself, and this had replaced an even earlier shrine sacred to the ancient gods of Lutetia. There is also a connection with the legends of post-Roman Britain. Here in 464 Arthur, the son of Uther Pendragon, is said to have called upon the Virgin Mary for protection in his forthcoming battle near Paris with a Roman military detachment. The Virgin offered Arthur her cloak, and the hero of Romano-British legend was able to defeat Flolo, the Roman tribune.  (O’Reilly: The Ermine Lady, HTML)

Paris was a city deeply rooted in religious conviction.

Eleven years after the defeat of the Gallo-Roman Flolo, Saint Genevieve built a prominent shrine to St Denis (Dionysius, d. 250), the first missionary martyr of ancient Lutetia.  The church was built on an ancient Roman road that crossed Île de la Cité and continued some six miles further north to the site of the new church and on to Amiens. The church was visible to all who passed by as they travelled south to Paris or north to Amiens. A mile or so to the west the Seine twists and turns back on itself as it makes its long journey to the sea. The area around St-Denis was believed to be the sacred centre of Gaul. Julius Caesar recorded that Druids from as far away as Britannia and the Mediterranean came to these Lutetian marshes for the purpose of electing their supreme spiritual leader.

After Clovis I converted to Christianity Paris became a significant religious centre. In 556-558, during the reign of Clovis’s son Childebert I, the church of Sainte-Croix-et-Sainte-Vincent was built. Chlothar I was buried at St Medard in 561, which he had built and dedicated to the saint in Soissons. St-Germain, Bishop of Paris and a principal inspiration for the church’s dedication, established an adjacent monastery dedicated to Saint Symphorien. In the chapel Childebert placed the tunic of St. Vincent that had been brought from the Holy Land. The church also preserves Childebert’s remains; he died on the day of the church’s consecration in 558. 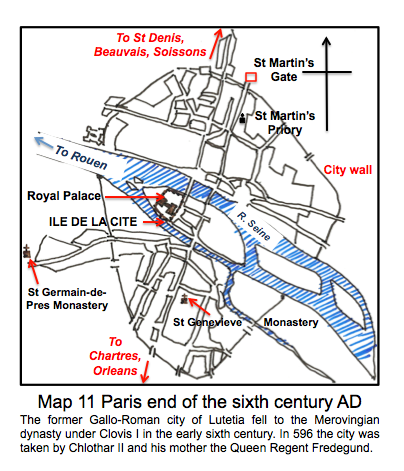 The Prieure Saint-Martin-des-Champs (St Martin in the Fields) in Paris was recorded in a charter dating from AD 709/10, providing the earliest mention of St Martin’s Priory in Paris.  The priory was located within the city walls on the north bank of the Seine, on the Rue St-Martin, leading to the city gate Porte St-Martin. A religious community may have existed on this site as early as 558. (Some of the later St Martin’s Priory buildings still survive as part of the Conservatoire National des Arts et Métiers). It is possible that St Martin’s Priory was Augustine’s destination in Paris, but to reach it from the south after a long day’s journey meant crossing the Seine by way of two over-crowded bridges leading to and from the Ile-de-la-Cite.

Queen Fredegund was also buried at St-Germain after her death in 597, and may have lived out her last days there. (Athena Review: Ancient and Medieval Paris, 26-28) After St. Germain was canonised in 756 both the church and monastery became the Benedictine Abbey of St-Germain-des-Prés, outside the city walls.

The city contained both the palace and mausoleum of Clovis, founder of the Merovingian dynasty. The basilica of St-Denis was the last resting place of Neustrian kings from early times, however not all were buried there. (Spiegel: Cult of St-Denis, 43) The remains of Clovis I were not transferred to St-Denis from the crypt of St-Genevieve (on the Left Bank of the Seine) until the eighteenth century.

Childebert I (d.568) was succeeded by his nephew Charibert I who ruled Paris from 561 until his death in 567. However Charibert was not buried in Paris but in Blavia Castellum, a military fort by the sea in the Tractus Armoricani, present-day Normandy. Charibert’s daughter Bertha was probably born in the royal palace on Île de la Cité, the city that Chlothar II of Neustria and his mother Fredegund were anxious to seize in 596. The treatment handed out to her father’s mortal remains may have influenced Bertha’s own views of dynastic burial practices  in Canterbury.

It is not clear to whom the city would normally have paid tribute in the three decades after Charibert’s death. The capture of Paris was an opportunistic move by Fredegund and Chlothar II, but seizing the city had much deeper significance than simply taking control of its tax revenues. Symbolism was a powerful weapon in the struggle for control of Francia. Fredegund was making a statement about Chlothar’s legitimacy, much disputed at the time of his birth, through establishing her son in Francia’s ancient dynastic capital. By early 597 Charibert’s former royal palace on Île de la Cité had only recently become Chlothar II’s royal seat. The small island, still surrounded by fortified walls, made a defensible area with the Seine serving as a moat. Nevertheless, as Donaldson describes, Paris in 597 might have seemed:

… rather insignificant, a busy little town on an island in the middle of the river Seine where they built a temple to Jupiter, which is now the site of the present Cathedral of Notre Dame, on the Île de la Cité. In AD 508 the Merovingian King Clovis made it his capital with Queen Clothild. In AD 586 Paris was devastated. A woman had prophesied that the whole town would be destroyed by fire, and so it was. Houses one after another were set alight, until the fire came to a small oratory built to commemorate how St Martin had once kissed a leper. … All this devastation must still have been in many peoples’ minds, and the miracle, eleven years later as the pilgrims came in 596-7. (Donaldson: The Great English Pilgrimage, 92)

A MODEL OF MEROVINGIAN PARIS : http://whitemouse.ru/photo/paris/cite_ndp_history.wmb

A TOUR OF ROMAN PARIS:  http://www.paris.culture.fr/en/

A BRIEF  HISTORY OF PARIS:

Rob retired in 2014 from his post of Director of Licensed Ministries in Canterbury Diocese. His current interests are: leading programmes in missional leadership, writing, research, painting and travel. He is a founder member of a 'new monastic' community, the Companions of Augustine of Canterbury, drawing on the inspiration of Augustine's mission to England in 597. View all posts by robmack